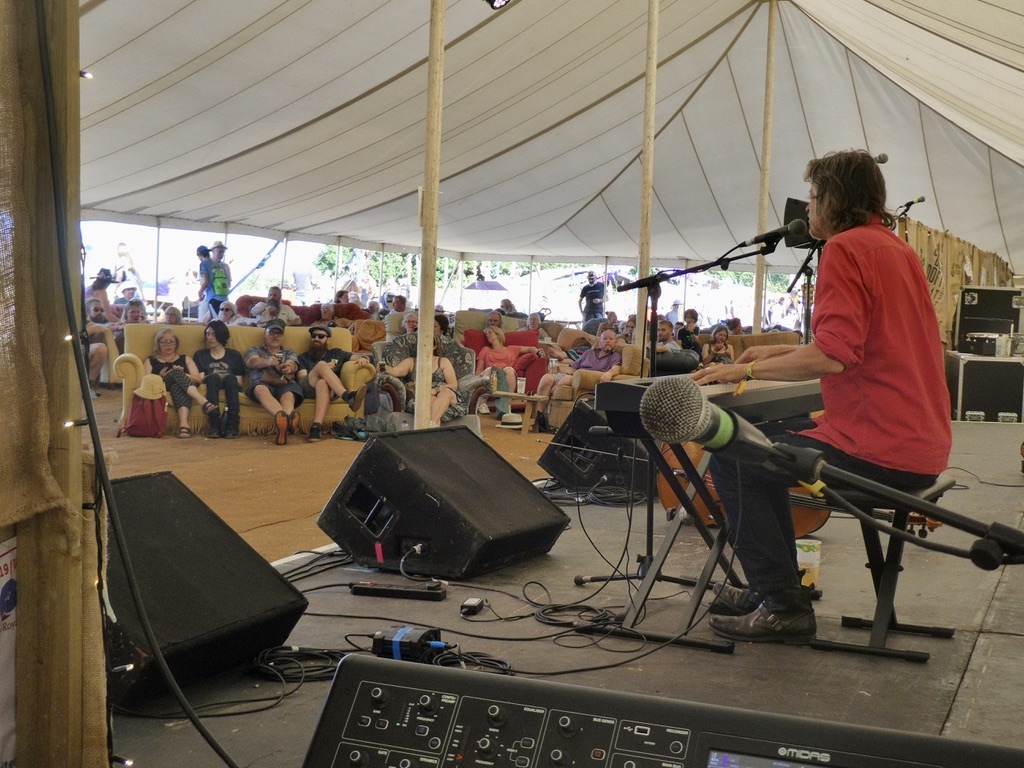 July 2022. It was the hottest couple of weeks I can ever remember in Britain, but it was a good time to be on tour; several of the shows were outdoors and for at least half the tour I was in a car that had air con.

I started with a warm up (no pun intended) house concert in a friend’s garden in Oxford. Present in the small audience, was a mother and daughter just arrived from Ukraine; they looked like ghosts; I did not dare ask them what they had been through. The lady did not speak much English but she managed to tell me afterwards that I made her heart sing. That made my heart sing too.

Great to be back on a festival stage again at the Rhythmtree Festival on the Isle of Wight. The audience were very relaxed, in fact they were all reclining on sofas and sipping cold beer. Thanks to all, especially to the great stage crew who soundchecked all five of my instruments in record time. And to the bar staff, who kept the beer beautifully chilled. The icing on the cake was getting put in The Woodvale Hotel right on the seafront; swimming in the sea was a good start to the next day.

The tour continues through the balmy English summer, driving down windy roads, through beautiful countryside and playing interesting places. I am in the company of my tour manager Tom Povey, who is doing most of the driving and organising. This is making life a lot easier.

After the Isle of Wight and a ferry ride to the mainland, we drove up to Norfolk. The Ely Folk Festival was not only good to play but I also got to see some great other acts. Notable were Honey And The Bear, and the incredible rockin’ Quebecois band, De Temps Antan. Yes, folk music is alive and well.

Next up was The Fleece in Bretforton; I played in a marquee in the garden of this 600 year old pub and slept in their gypsy caravan. It was surprisingly comfortable. Tom got the room in the pub, but I think I got the best deal. This show had been postponed twice over the last two years due to covid, so I was pleased to finally get a chance to play there.

On to Wales and just across the border to Presteigne to play for Mid Border Arts at the Assembly Rooms. A surprise there was a Steinway grand piano. What a great sound they make, I used it for four songs. A good crowd turned up, including a few old friends and I slept the night in Cindy’s wonderful old mill on the River Lugg. I woke to the sound of water from the little weir outside the window.

The temperature has cooled a little now. Earlier in the week it was 32c when I had a day off in Oxford. I walked all over town before cooling myself in the air conditioned halls of the Ashmoleum Museum (Egyptian and Greek section).

Next was a show for Marlborough Roots, in the Old Court Room of Marlborough Town Hall. A lovely old building with fine acoustics.

On for the last public show, the Netley Chapel Sessions in a church near Southampton. Then Saturday for a house concert in Honiton, Devon, before heading back to Sweden.

Thanks to everyone who turned up and listened. So good to be out on the road again in England and Wales. I will be back in April next year.